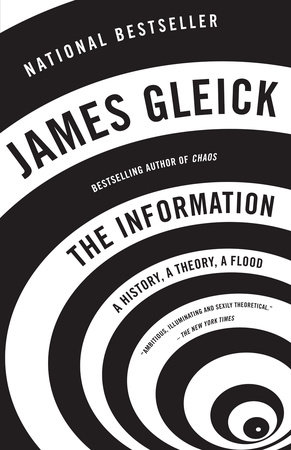 Few would argue that talking drums are part of IT, yet they are a technology to transmit information. I think it is thus right that James Gleick opens his truly fascinating book on Information (“The Information: A History, a Theory, a Flood“) with a chapter on these drums.
After talking drums, Gleick goes on to discuss early alphabetically-ordered dictionaries (a concept unique to languages that actually use alphabets), Charles Babbage’s analog computers, the mechanical and electrical telegraphs (that allowed information to be transfered faster than humans even for people who didn’t know how to use talking drums) and the telephone. But all throughout the book, the technology is made subordinate to information itself, which is implicitly treated as a philosophical concept.
The true hero of both the book, “father of information theory” Claude Shannon (1916-2001), makes his first appearance about halfway through. Shannon did important work on early computers and on code breaking (he cooperated with his British contemporary Alan Turing during the Second World War) but most importantly of all, he was the inventor of the ‘bit’ as the basic unit of information.
This is defined by Shannon not as the result of counting the number of zeros and ones used to store a particular message, but as a the amount of information actually contained in that message. Anyone who has ever used a program like WinZip to compress a text file, or who has ever found the need to rephrase a message so that it would fit into 140 (now 280) characters, knows that there is often less information contained in a message than that is used to store it. Though the exact amount of information is in most cases impossible to measure accurately, Shannon estimated that an average English text contained about 50% redundancy.
With the appearance of Shannon, things really took off for the information age. Computers came along, while at the same time DNA was discovered: the hard drives contained in every cell in every living organism. A full chapter of the book is dedicated to memes, a concept from evolutionary biology, and specific pieces of information ‘going viral’.
Again, Gleick’s book focuses less on “how does it work?” and more on “what does it mean?”, hence logicians like Bertrand Russel and Kurt Gödel feature prominently; I was intrigued to learn how the paradoxes studied by the former (for example the Berry Paradox) are very relevant to information theory. Important but surprisingly hard to grasp notions like randomness and entropy, often passed over briefly in more practically focused books, are also discussed intensively.
The book ends with a chapter on information overload, and it was somewhat of a relief to learn that concerns about more information not necessarily being better do in fact have a very long history.
Before that, Gleick has already cast a glimpse into the future of computing and the possible arrival of quantum computers. As a mathematician, I always feel a bit uncomfortable about the possibility that future computers may be based on physics rather than on mathematics and I hold on to the beliefs of some experts who say that practical quantum computers will never see the light of day. Conceptually, however, such computers are truly fascinating. And of course, Gleick’s focus is on that.